You can find Missy Alcazar jamming at the Shout! House Dueling Pianos Bar in the Gaslamp District of San Diego most nights! Her giant smile and upbeat energy make her a crowd favorite! Missy was born in raised in Highland Park, Los Angeles: an area known for its rich immigrant history and various art movements. A dueling pianist and songstress, Missy is a beautiful soul with a passion and gift for music!

Here’s everything you need to know about Melissa “Missy” Alcazar:

Q: Tell me about yourself: 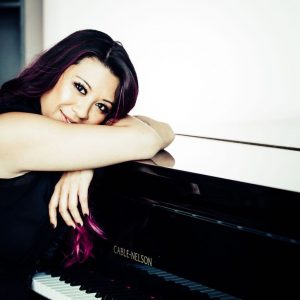 I was born and raised in Los Angeles as a first generation Filipina-American and the eldest of two brothers. I started playing the piano when I was four. I received a Masters in Fine Arts majoring in Piano Performance! From 2010-2013 I toured as a concert pianist and built my own piano studio in North County San Diego as well as South Pasadena. I was a featured pianist at the “Moster Pianos” Concert at the San Diego Symphony Copley Hall in 2016. I started actively singing and songwriting when I was 28!

Q. You have so much experience in music! How did you start with the Shout! House?
I actually only knew two songs when I got hired at the Shout! House in 2013! The first song I learned for “Shout” was “Hit the Road Jack.” I auditioned and it got me hired!

Q. What is your favorite song to play?
Give Me One Reason by Tracy Chapman and Killing Me Softly (the Fugees version).

Q. How long do you practice every day? What do you do to prepare for a show?
I practice 1-2 hours a day. Does learning a song in the car while driving count as practicing?
Depending on my mood and what goals are set for the week, I practice scales, sight reading, pop songs I need to relearn and whatever is in my never-ending “Songs to Learn” list for the Shout! House!

Q. What’s your favorite part of playing at the Shout! House? 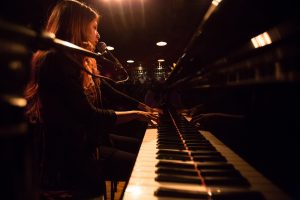 My favorite thing about playing at “Shout” is the feeling I get when I make the entire crowd laugh and smile without having to think about it. It doesn’t happen a lot, but when it does, it’s the greatest feeling in the world.

Q. Do you ever get nervous before a performance?
Sometimes I get nervous before performing. It depends on what kind of crowd there is. If they’re chatty and aren’t paying attention to the show I get nervous. My pre-show ritual usually involves meditating 30-60min beforehand, warming up my voice, and positive affirmations. I also do light yoga.

Q. How do you handle mistakes during a performance?
There’s no such thing as mistakes. *wink*
Q. What is your biggest challenge as a musician?
My biggest challenge is being a female in a male-driven music industry. I feel like I have to work twice as hard to get my voice heard and to get the respect I deserve to prove my level of musicianship.
Q. Do you have any advice for aspiring musicians?
If you love it, do it. And always use protection! *another wink*
Q. Tell us a fun fact!
I quit piano immediately after college for three years to become a professional snowboarder.

Q. Is there anything else you want the patrons at the Shout! House to know about you? 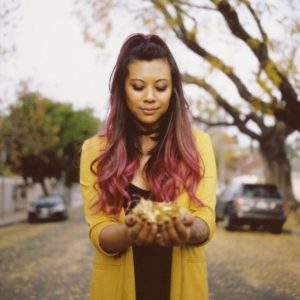 As outgoing as I may seem onstage, I’m incredibly introverted and prefer being at home or hiking in the forest or desert. I’m not a fan of small talk and prefer to be silent and do so when I can. I do my best work when I’m in my own self-created sanctuary space where I can paint, write and create. I’m a hippie at heart and make forest and desert bath trips regularly.  I get most of my ideas when I’m on the road driving.

Q. And to finish: what is your favorite quote that you feel describes your music style?

“You’ve got a great voice with an edge.” – Roger Hunt 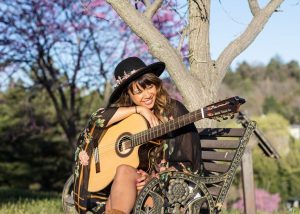 Missy just released her DEBUT EP Album on iTunes! Watch her here!
Follow her on Instagram!
@missyalcazarmusic @misspianist67
Catch Melissa “Missy” Alcazar performing at the Shout! House in the heart of the Gaslamp Quarter in San Diego!
To make a reservation, visit: https://theshouthouse.com/reservations/